The history of the San Diego region is intertwined with its never-ending search for a safe, reliable water supply.

For more than 70 years, the Water Authority has pursued its mission to provide the region with a safe, reliable water supply.

This role links the Water Authority with the first Spanish missionaries and soldiers who arrived in the area in 1769, swiftly realized the local water supply was small and erratic, and began "developing water" (as water industry officials call it).

The Spaniards constructed a dam across the San Diego River and linked the resulting reservoir with the Mission San Diego de Alcala via a six-mile aqueduct.

"Old Mission Dam was the first irrigation and domestic water system ever built by Europeans in the Far West," writes historian Kevin Starr in “Material Dreams: Southern California Through the 1920s.”

The Old Mission Dam, which still exists in Mission Trails Regional Park, was the first water development project in San Diego County. Development accelerated greatly in the second half of the 19th century. Private companies erected six major dams on local rivers between 1887 and 1897. All six stand today, providing water for residents.

"By the end of the last [19th] century, San Diego County could accurately be described as one of the major focal points of dam construction in the world, and by 1923 every major drainage system in the county included at least one reservoir," writes geographer Philip Pryde in his book, “San Diego: An Introduction to the Region."

Despite some temporary shortages, this system of local reservoirs provided sufficient water for the county until World War II, when a vastly expanded military presence practically doubled the population in six years.

The San Diego County Water Authority was created June 9, 1944 by an act of the state Legislature as a public agency to administer the region's Colorado River water rights. Water from the river first arrived in the new San Vicente Reservoir in November 1947.

When the Water Authority began operations, it was concerned solely with securing a reliable imported water supply and then delivering it to the San Diego region. The agency did this by working with the Navy and U.S. Bureau of Reclamation to construct the first two pipelines linking San Diego County and the Colorado River Aqueduct, which is owned and operated by the Metropolitan Water District of Southern California (MWD).

After the second pipeline was completed in 1952, the Water Authority itself installed three more pipelines, giving the region five large-diameter pipelines that extend north-south throughout the county. These pipes are kept filled with water from the Colorado River and from Northern California, via the State Water Project.

In the 1940s, the Navy had planned to construct Pipeline 1 to ensure it would have enough water for its local installations. But after World War II ended, the project was canceled to save money. 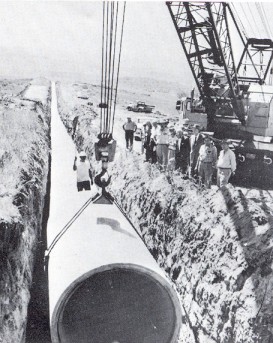 A similar struggle was necessary to get Pipeline 2 constructed in 1952.

Water Authority officials, including then Board Chairman Fred A. Heilbron and General Counsel William H. Jennings, joined by Water Authority and MWD Director Harry Griffen, were part of the historic statewide effort to gain approval of the Burns-Porter Act authorizing the State Water Project. The State Legislature approved the act in 1959; California voters authorized funding a year later.

In addition to importing water and selling it to its member agencies, the Water Authority always has been active in state and federal legislation and issues that impact water supply.

The Water Authority also promotes legislation facilitating water conservation and recycled water programs. It joined other urban water agencies to support legislation that allows California farmers to voluntarily sell their water to meet the needs of thirsty cities and industry.

Over the past two decades, the Water Authority, in coordination with its 24 member retail water agencies, has developed and executed a long-term plan to enhance the reliability of the region's water supply. That strategy includes diversifying the region's portfolio of water supply sources, making major improvements to the region's water infrastructure, and promoting greater water-use efficiency.

One of the key efforts in the Water Authority’s strategy came to fruition in 2003. After years of negotiations, the Imperial Irrigation District, the Water Authority, Metropolitan Water District of Southern California and the Coachella Valley Water District, along with the state of California and the U.S. Department of Interior, completed a series of complex agreements – collectively known as the Colorado River Quantification Settlement Agreement -- to conserve and transfer water. 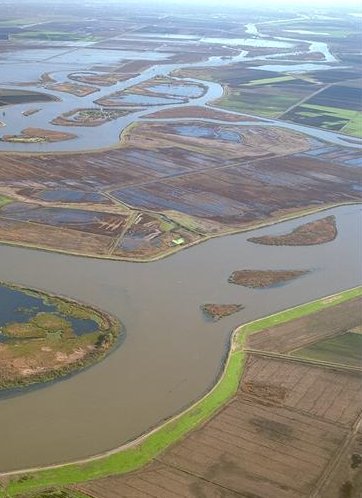 The Bay-Delta is formed by the confluence of the state’s two largest rivers: the Sacramento flowing south from its headwaters near Mt. Shasta and the San Joaquin flowing north from its origins high in the southern Sierra Nevada.

As part of the agreement, the Water Authority agreed to construct concrete-lined canals alongside sections of the existing All-American and Coachella earthen canals. The Water Authority will receive about 80,000 acre-feet of conserved water per year for 110 years from these projects.

At the local level, the Water Authority works hand-in-hand with its member agencies to develop local supplies such as groundwater, recycled water and seawater desalination. By 2035, local water supplies are projected to meet nearly half of the region’s water demands. The Water Authority is also a state-wide leader in improving water-use efficiency to make the most of this precious resource.

Through its $2.8 billion Capital Improvement Program to further improve regional water delivery and storage capacity, the Water Authority is continuing its commitment to ensuring a safe and reliable water supply. The CIP, which is designed to meet the regional water infrastructure needs decades into the future, will allow the Water Authority to store and transport both imported and local water supplies efficiently and effectively around the region.

A major part of the CIP is the $1.5 billion Emergency & Carryover Storage Project, a system of reservoirs, interconnected pipelines, and pumping stations, designed to make water available to the San Diego region in the event of an interruption in imported water deliveries. It provides up to six months of emergency water storage in the San Diego region and allows for region-wide emergency water distribution through an expanded pipeline system.

The Water Authority's strategy to improve supply reliability through supply diversification and infrastructure improvements already is paying off. In recent years, MWD has periodically curtailed water deliveries to the San Diego region due to dry conditions and regulatory restrictions on water deliveries from Northern California. Those cuts have been significantly offset by additional supplies independently obtained by the Water Authority -- especially the long-term transfers of conserved water from the Colorado River made possible by the Quantification Settlement Agreement.

During its evolution from an importer of water to the sophisticated water planning organization of today, the Water Authority has never lost sight of its primary mission -- to provide San Diego County with a safe and reliable water supply for generations to come.

Analysis released today shows that proposals by the Fallbrook and Rainbow…

With the recession and the COVID-19 pandemic causing economic havoc…