The Quantification Settlement Agreement for the Colorado River was completed in October 2003. This historic agreement provides California the means to implement water transfers and supply programs that will allow California to live within the state's 4.4 million acre-foot basic annual apportionment of Colorado River water.

The QSA is a major achievement for enhancing San Diego County's long-term water supply reliability. Supplies related to the accord now account for nearly 38 percent of our region's water and they will continue to grow in the years ahead.

A major supply source secured for San Diego under the QSA is the Water Authority-Imperial Irrigation District Water Transfer, which will provide up to 200,000 acre feet of water to the region by 2020. 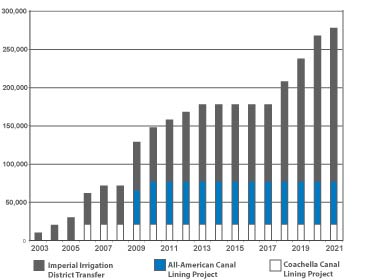 2. Salton Sea Restoration — As part of the QSA legislation enacted in October 2003, the state of California is obligated to undertake the restoration of the Salton Sea ecosystem. Click here for more information on the Salton Sea.

The QSA has held up to scrutiny under several unsuccessful legal challenges in state and federal court. In 2014, for instance, a three-judge panel of the 9th U.S. Circuit Court of Appeal upheld a District Court ruling that the Secretary of the Interior did not violate the National Environmental Policy Act or the Clean Air Act in approving the Colorado River Water Delivery Agreement.

Agreements to which the San Diego County Water Authority are signatories include:

The California Department of Water Resources has awarded more than $15…

Following a public hearing, the San Diego County Water Authority’s Board of…